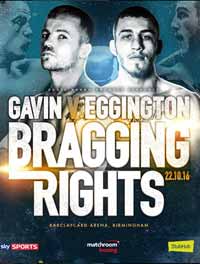 Review by AllTheBestFights.com: 2016-10-22, great fight between Frankie Gavin and Sam Eggington: it is close to get four stars!

Frankie Gavin entered this fight with a professional boxing record of 23-2-0 (14 knockouts) and he is ranked as the No.14 welterweight in the world. He lost to Kell Brook last year (=Brook vs Gavin) but he came back to win against Ivo Gogosevic in 2016.
His opponent, Sam Eggington, has an official record of 18-3-0 (10 knockouts) and he entered as the No.46 in the same weight class. He has already fought twice in 2016 losing to Bradley Skeete (=Eggington vs Skeete) and winning over Daza Usher. Gavin vs Eggington is valid for the vacant WBC International welterweight title. Watch the video and rate this fight!