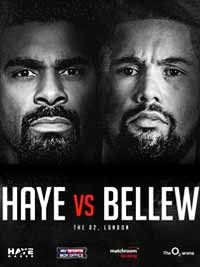 Review by AllTheBestFights.com: 2017-03-04, pretty good finish between Sam Eggington and Paul Malignaggi but it is not enough to get three stars: it gets two.

Sam Eggington entered this fight with a record of 19-3-0 (11 knockouts) and he is ranked as the No.20 welterweight in the world. He fought three times last year losing to Bradley Skeete (=Eggington vs Skeete) and winning over Daza Usher and Frankie Gavin (=Gavin vs Eggington).
His opponent, the former world champion in two different weight classes Paul Malignaggi, has a boxing record of 36-7-0 (7 knockouts) and he entered as the No.19 in the same weight class. He lost two consecutive bouts between 2014 and 2015, against Shawn Porter (=Porter vs Malignaggi) and Danny Garcia (=Garcia vs Malignaggi), but then he has won three fights. Sam Eggington vs Paul Malignaggi is valid for the WBC International welterweight title; undercard of David Haye vs Tony Bellew. Watch the video and rate this fight!