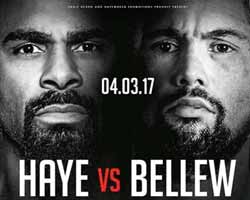 The former world champion in two different weight classes David Haye entered this fight with a professional record of 28-2-0 (26 KOs=93%) and he is ranked as the No.10 heavyweight in the world (currently the #1 in this division is Anthony Joshua). ‘Hayemaker’ suffered his last loss when he faced Wladimir Klitschko in 2011 (=Klitschko vs Haye), since then he has fought just three times beating Dereck Chisora (=Haye vs Chisora), Mark de Mori (=Haye vs de Mori) and Arnold Gjergjaj (=Haye vs Gjergjaj).
His opponent, the former Wbc Cw champion Tony Bellew, has a boxing record of 28-2-1 (18 knockouts) and he entered as the No.2 cruiserweight. ‘Bomber’ suffered his last loss when he faced Adonis Stevenson in 2013 (=Stevenson vs Bellew), after this bout he has won eight consecutive fights beating Ilunga Makabu (=Bellew vs Makabu) and BJ Flores in 2016 (=Bellew vs Flores). David Haye vs Tony Bellew is the main event of the evening. Watch the video and rate this fight!

Their next fight: Tony Bellew vs David Haye 2