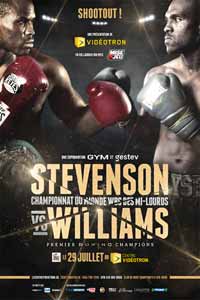 Review by AllTheBestFights.com: 2016-07-29, fight not so exciting between Eleider Alvarez and Robert Berridge: it gets two stars.

The undefeated Eleider Alvarez entered this fight with a perfect boxing record of 19-0-0 (10 knockouts) and he is ranked as the No.4 light heavyweight in the world (currently the #1 in this division is Sergey Kovalev). He fought three times last year winning over Anatoliy Dudchenko, Isidro Ranoni Prieto (=Alvarez vs Prieto) and Isaac Chilemba (=Alvarez vs Chilemba).
His opponent, Robert Berridge, has an official record of 27-4-1 (21 KOs=78%) and he entered as the No.71 in the same weight class but he lost two out of his last three bouts, against Thomas Oosthuizen and Reece Papuni; between these two fights he beat Sefo Falekaono. Alvarez vs Berridge is on the undercard of Adonis Stevenson vs Thomas Williams Jr. Watch the video and rate this fight!