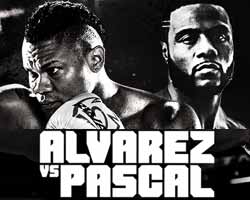 Review by AllTheBestFights.com: 2017-06-03, close fight but not so exciting: Eleider Alvarez vs Jean Pascal gets two stars.

The undefeated Eleider Alvarez entered this fight with a perfect record of 22-0-0 (11 knockouts) and he is ranked as the No.8 light heavyweight in the world (currently the #1 in this division is Andre Ward). In his last three bouts he has won over Robert Berridge (=Alvarez vs Berridge), Norbert Dabrowski and Lucian Bute (=Alvarez vs Bute).
His opponent, the former Wbc and Ibo light-Hw champion Jean Pascal, has a boxing record of 31-4-1 (18 knockouts) and he entered as the No.6 in the same weight class. He fought twice last year losing to Sergey Kovalev (=Kovalev vs Pascal 2) and beating Ricardo Marcelo Ramallo. Jean Pascal vs Eleider Alvarez is valid for the WBC Silver light heavyweight title; undercard of Adonis Stevenson vs Andrzej Fonfara 2. Watch the video and rate this fight!

Alternative Video: (Free embeddable video hosted on Youtube and not uploaded by AllTheBestFights)