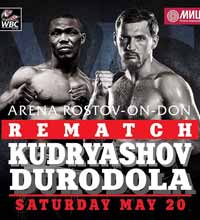 Dmitry Kudryashov entered this fight with a boxing record of 20-1-0 (20 KOs=100%) and he is ranked as the No.24 cruiserweight in the world. He suffered his only loss when he faced Olanrewaju Durodola in their first fight in 2015 (via tko in the second round, Kudryashov vs Durodola I), after this bout he has won over Julio Cesar Dos Santos and Santander Silgado.
His opponent, Olanrewaju Durodola, has an official record of 25-3-0 (23 KOs=92%) and he entered as the No.14 in the same weight class. He lost to Mairis Briedis last year (=Briedis vs Durodola) but then he has beat Yuberti Suarez Diaz, Pascal Ndomba and Mussa Ajibu. Dmitry Kudryashov vs Olanrewaju Durodola 2 is valid for the WBC Silver cruiserweight title. Watch the video and rate this fight!