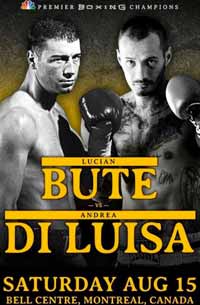 Review by AllTheBestFights.com: 2015-08-15, good fight between Eleider Alvarez and Isidro Prieto: it gets three stars.

Both undefeated, the Colombian Eleider Alvarez entered this fight with a perfect record of 17-0-0 (10 knockouts) and he is ranked as the No.5 light heavyweight in the world (currently the #1 in this division is Sergey Kovalev) while his opponent, Isidro Ranoni Prieto, has a record of 24-0-3 (20 KOs=83%) and he entered as the No.23 in the same weight class. Both boxers have already fought in 2015: Alvarez has beat Anatoliy Dudchenko while Prieto has won over Jackson Junior (=Prieto vs Junior) and Edson Roberto Dos Santos Borges. Alvarez vs Prieto is valid for the WBC Silver light heavyweight title; undercard of Lucian Bute vs Andrea Di Luisa. Watch the video and rate this fight!