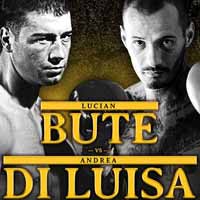 The former Ibf super-Mw champion Lucian Bute entered this fight with a professional boxing record of 31-2-0 (24 knockouts) but he is not ranked as he hasn’t fought since January 18, 2014 when he was defeated by Jean Pascal (=Pascal vs Bute).
His opponent, Andrea Di Luisa, has an official record of 17-2-0 (13 KOs=76%) and he entered as the No.61 super middleweight in the world. He suffered his last loss in 2012 when he faced Christopher Rebrasse, since then he has won four bouts beating Roberto Cocco in his last one. Bute vs Di Luisa is the main event of the evening. Watch the video and rate this fight!