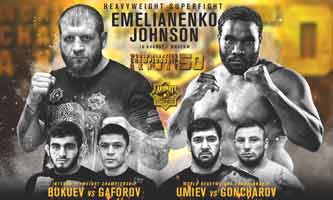 Review by AllTheBestFights.com: 2018-08-18, pretty good fight between Alexander Emelianenko and Tony Johnson: it gets three stars.

(Free embeddable video hosted on Youtube and not uploaded by AllTheBestFights)
https://www.youtube.com/watch?v=9jQ-_Oh6U5Y