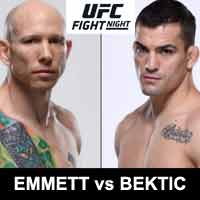 Review by AllTheBestFights.com: 2019-07-13, fight not so exciting between Josh Emmett and Mirsad Bektic: it gets two stars.

Josh Emmett entered this fight with a mma record of 14-2-0 (50% finishing rate) and he is ranked as the No.7 featherweight in the world (currently the #1 in this division is Max Holloway). He lost to Jeremy Stephens last year (Josh Emmett vs Jeremy Stephens) but he came back to win in 2019 against Michael Johnson (Josh Emmett vs Michael Johnson).
His opponent, Mirsad Bektic, has an official record of 13-1-0 (69% finishing rate) and he entered as the No.14 in the same weight class. He suffered his only loss when he faced Darren Elkins in 2017 (Darren Elkins vs Mirsad Bektic), after this bout he has beat Godofredo Pepey and Ricardo Lamas (Ricardo Lamas vs Mirsad Bektic). Emmett vs Bektic is on the undercard of Germaine de Randamie vs Aspen Ladd – UFC Fight Night 155 (UFC on ESPN+ 13). Watch the video and rate this fight!