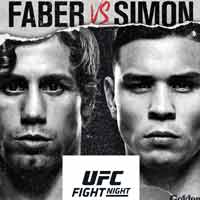 Review by AllTheBestFights.com: 2019-07-13, pretty good fight between Urijah Faber and Ricky Simon: it gets three stars (UFC Performance of the Night).

The 40-year-old (14 years older than Simon) Urijah Faber entered this fight with a pro mma record of 34-10-0 (76% finishing rate) but he is not ranked as he hasn’t fought since December 17, 2016 when he defeated Brad Pickett (Urijah Faber vs Brad Pickett); before this bout, in 2016, he had lost twice, against Dominick Cruz (Cruz vs Faber 3) and Jimmie Rivera (Faber vs Rivera).
His opponent, Ricky Simon, has a record of 15-1-0 (47% finishing rate) and he entered as the No.15 in the same weight class. He suffered his only loss when he faced Anderson dos Santos in 2016, since then he has won eight consecutive fights defeating Merab Dvalishvili, Montel Jackson and Rani Yahya in his last three (Rani Yahya vs Ricky Simon). Faber vs Simon is on the undercard of Germaine de Randamie vs Aspen Ladd – UFC Fight Night 155 (UFC on ESPN+ 13). Watch the video and rate this fight!