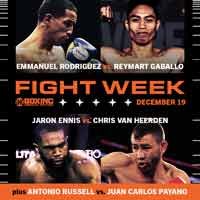 Review by AllTheBestFights.com: 2020-12-19, we hope to see a rematch between Jaron Ennis and Chris van Heerden: it gets two stars (take a look at our ranking of the best boxing fights of 2020).
The undefeated Jaron Ennis entered this fight with a perfect boxing record of 26-0-0 (24 KOs=92%) and he is ranked as the No.24 welterweight in the world. In his last three fights he has won over Demian Daniel Fernandez, Bakhtiyar Eyubov and Juan Carlos Abreu.
His opponent, the former Ibo Ww champion Chris van Heerden, has a record of 28-2-1 (12 knockouts) and he entered as the No.29 in the same weight class. He lost to Errol Spence Jr in 2015 (Errol Spence Jr vs Chris van Heerden) but then he has won five consecutive bouts defeating Timo Schwarzkopf (Chris van Heerden vs Timo Schwarzkopf), Mahonri Montes and Aslanbek Kozaev in his last three. Van Heerden vs Ennis is valid for the vacant IBO World welterweight title; undercard of Emmanuel Rodriguez vs Reymart Gaballo. Watch the video and rate this fight!