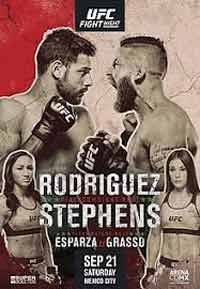 Review by AllTheBestFights.com: 2019-09-21, good fight between Carla Esparza and Alexa Grasso: it gets three stars (UFC Fight of the Night).

The former Ufc and Invicta FC champion Carla Esparza entered this fight with a pro mma record of 14-6-0 (50% finishing rate) and she is ranked as the No.11 women’s strawweight in the world. She lost two consecutive bouts last year, with Claudia Gadelha and Tatiana Suarez, but she came back to win against Virna Jandiroba in 2019.
His opponent, Alexa Grasso, has a record of 11-2-0 (36% ko/tko victory rate – she has never won via submission) and she entered as the No.14 in the same weight class. She was also defeated by Tatiana Suarez in 2018 (Alexa Grasso vs Tatiana Suarez) but then she has beat Karolina Kowalkiewicz in 2019. Esparza vs Grasso is on the undercard of Yair Rodriguez vs Jeremy Stephens – UFC Fight Night 159 (UFC on ESPN+ 17). Watch the video and rate this fight!