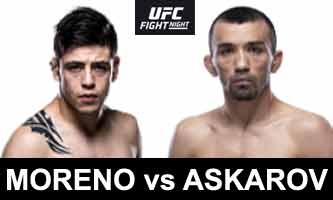 Review by AllTheBestFights.com: 2019-09-21, pretty good fight between Brandon Moreno and Askar Askarov: it gets three stars.

Brandon Moreno entered this fight with a mma record of 15-5-0 (80% finishing rate) and he is ranked as the No.9 flyweight in the world (currently the #1 in this division is Joseph Benavidez). He lost two consecutive bouts between 2017 and 2018, with Sergio Pettis (Sergio Pettis vs Brandon Moreno) and Alexandre Pantoja (Brandon Moreno vs Alexandre Pantoja), but he came back to win against Maikel Pérez in 2019.
His opponent, the undefeated Askar Askarov, has a perfect record of 10-0-0 (100% finishing rate) but he is not ranked as he hasn’t fought since May 5, 2018 when he defeated Rasul Albaskhanov; before this fight, in 2017, he had also beat Anthony Leone. Moreno vs Askarov is on the undercard of Yair Rodriguez vs Jeremy Stephens – UFC Fight Night 159 (UFC on ESPN+ 17). Watch the video and rate this fight!