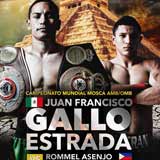 Review by AllTheBestFights.com: 2015-03-28, some good exchanges but with a disappointing finish: Juan Francisco Estrada vs Rommel Asenjo gets two stars.

Juan Francisco Estrada entered this fight with a professional boxing record of 31-2-0 (22 knockouts) and he is ranked as the No.2 flyweight in the world; he suffered his last defeat in 2012 when he faced #1 Roman Gonzalez (=Gonzalez vs Estrada), since then he has fought five consecutive bouts beating Joebert Alvarez in his last fight (=Estrada vs Alvarez).
His opponent, Rommel Asenjo, has an official record of 26-3-0 (20 knockouts) and he entered as the No.78 light flyweight; the last time he lost was in 2011, against Raul Garcia (=Garcia vs Asenjo). After losing he has fought and won six bouts defeating Powell Balaba in his last fight. ‘El Gallo’ Estrada vs Asenjo is valid for the WBA and WBO World flyweight titles (both held by Estrada). Watch the video and rate this fight!