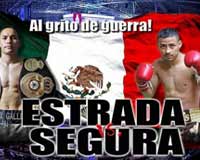 Review: 2014-09-06, nice battle between Juan Francisco Estrada and Giovani Segura: it gets three stars. Juan Francisco Estrada entered this fight with a pro boxing record of 26-2-0 (19 knockouts) and he is ranked as the No.2 flyweight in the world (currently the #1 in this division is Akira Yaegashi); he suffered his last defeat in 2012 when he faced the unbeaten Roman Gonzalez for the Wba light-Flw belt (=Gonzalez vs Estrada), after that bout he has won three consecutive fights winning the Wbo and Wba titles in the flyweights.
His opponent, Giovani Segura, has an official record of 32-3-1 (28 KOs=87%) and he entered as the No.3 in the same weight class, he was the Wba light-Flw champion from 2009 to 2011 when he moved up in weight class to the flyweight; in this division he lost to Brian Viloria in 2011 (=Segura vs Viloria) and to Edgar Sosa last year (=Sosa vs Segura). Estrada vs Segura is valid for the WBA and WBO flyweight titles (both titles held by Estrada). Watch the video and rate this fight!