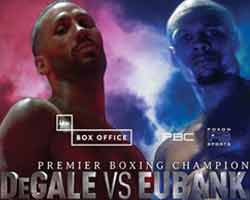 Review by AllTheBestFights.com: 2019-02-23, fight not so exciting between James DeGale and Chris Eubank Jr: it gets two stars.

The 2008 Olympic Mw gold medalist and former Ibf world champion James DeGale entered this fight with a boxing record of 25-2-1 (15 knockouts) and he is ranked as the No.8 super middleweight in the world (currently the #1 in this division is Callum Smith). He lost to Caleb Truax in 2017 (via majority decision, James DeGale vs Caleb Truax I) but then he fought twice in 2018 taking revenge on Truax (Caleb Truax vs James DeGale II) and beating Fidel Monterrosa Munoz.
His opponent, the former interim Wba Mw and Ibo super-Mw champ Chris Eubank Jr, has an official record of 27-2-0 (21 KOs=78%) and he entered as the No.2 in the same weight class. He fought twice last year losing to George Groves (Chris Eubank Jr vs George Groves) and defeating JJ McDonagh (Chris Eubank Jr vs JJ McDonagh). DeGale vs Eubank is valid for the vacant IBO World super middleweight title. Watch the video and rate this fight!