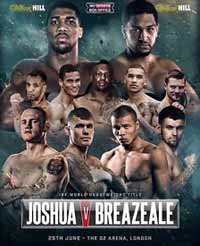 Review by AllTheBestFights.com: 2016-06-25, one beautiful round but the rest of the fight was not so exciting: Chris Eubank Jr vs Tom Doran gets two stars.

The former interim Wba Mw champion Chris Eubank Jr entered this fight with a boxing record of 22-1-0 (17 KOs=77%) and he is ranked as the No.5 middleweight in the world (currently the #1 in this division is Saul ‘Canelo’ Alvarez). He suffered his only loss when he faced Billy Joe Saunders in 2014 (via split decision, Saunders vs Eubank Jr), since then he has won four bouts beating Nick Blackwell in 2016 (=Eubank vs Blackwell).
His opponent, the undefeated Tom Doran, has a perfect record of 17-0-0 (7 knockouts) and he entered as the No.48 in the same weight class. He has already fought once in 2016 winning over Luke Keeler. Eubank vs Doran is valid for the BBBofC British middleweight title; undercard of Anthony Joshua vs Dominic Breazeale. Watch the video and rate this fight!