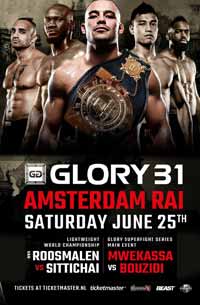 The 2012 K-1 world max champion Murthel Groenhart entered this fight with a professional record of 60-22-3 (33 knockouts) and he is ranked as the No.3 super middleweight in the world but he lost three out of his last five bouts, the last one against Artur Kyshenko (=Kyshenko vs Groenhart 2).
His opponent, Karim Benmansour, has a kickboxing record of 46-5-1 (22 knockouts) and he entered as the No.9 in the same weight class. He lost to James Gridley in 2014 but since then he has collected five victories. Groenhart vs Benmansour is the semifinal of the Glory welterweight contender tournament; undercard of Robin van Roosmalen vs Sitthichai Sitsongpeenong 2 – Glory 31. Watch the video and rate this fight!