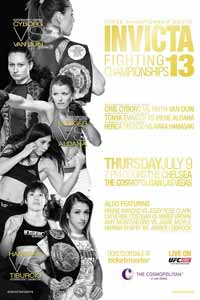 Review by AllTheBestFights.com: 2015-07-09, good work on the ground between Tonya Evinger and Irene Aldana: it gets three stars.

Tonya Evinger entered this fight with a mma record of 15-5-0 (80% finishing rate) and she is ranked as the No.11 women’s bantamweight in the world while her opponent, Irene Aldana, has an official record of 5-1-0 (100% finishing rate) and she entered as the No.19 in the same weight class. Evinger vs Aldana is valid for the vacant Invicta FC bantamweight title; undercard of Cris ‘Cyborg’ Justino vs Faith Van Duin. Watch the video and rate this fight!