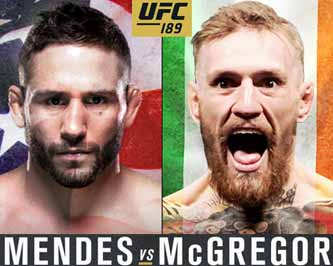 Review by AllTheBestFights.com: 2015-07-11, great fight between Conor McGregor and Chad Mendes: it is close to get four stars (UFC Performance of the Night).

Chad Mendes entered this fight with a professional mma record of 17-2-0 (53% finishing rate) and he is ranked as the No.4 featherweight in the world. The only man who stopped him twice was the #1 Ufc fw champion Jose Aldo: in 2012 (=Aldo vs Mendes) and in 2014 (=Aldo vs Mendes 2). After the second loss he came back to win beating Ricardo Lamas (=Mendes vs Lamas).
His opponent, Conor McGregor, has the same record of 17-2-0 (but with 94% finishing rate) and he entered as the No.6 in the same weight class. He suffered his last defeat in 2010 when he faced Joseph Duffy, but since then he has collected 13 consecutive victories (five in the Ufc) beating Dennis Siver in his last bout (=McGregor vs Siver). McGregor vs Mendes, main event of Ufc 189, is valid for the Ufc interim featherweight title (Mendes replaces Jose Aldo who has forced to withdraw from the bout due to an injury). Watch the video and rate this fight!