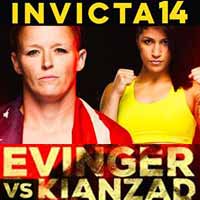 Review by AllTheBestFights.com: 2015-09-12, some good exchanges between Tonya Evinger and Pannie Kianzad but it is not enough to get three stars: it gets two.

The Invicta FC Bw champion Tonya Evinger entered this fight with a professional mma record of 16-5-0 (81% finishing rate) and she is ranked as the No.7 women’s bantamweight in the world (currently the #1 in this division is Ronda Rousey). She suffered two consecutive defeats between 2010 and 2011, against Alexis Davis and Sara McMann, but then she has won seven bouts beating Irene Aldana in her last one (=Evinger vs Aldana).
Her opponent, the undefeated Pannie Kianzad, has an official record of 8-0-0 (38% ko/tko victory rate – she has never won via submission) and she entered as the No.15 in the same weight class; she has fought once in 2015 defeating Jessica-Rose Clark. Evinger vs Kianzad is the main event of Invicta FC 14 (since both fighters weighed in over the weight limit, the bout was changed to a non-title fight). Watch the video and rate this fight!

Video: (Free embeddable video hosted on Youku.com and not uploaded by AllTheBestFights, to report it please visit this link where the video is hosted)

Full event video – the fight Evinger vs Kianzad starts at 229:00