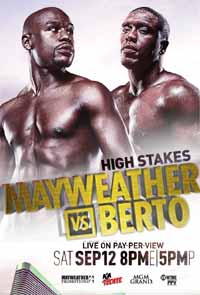 Review by AllTheBestFights.com: 2015-09-12, pretty good fight between Jhonny Gonzalez and Jonathan Oquendo: it gets three stars.

The former world champion in two different weight classes Jhonny Gonzalez entered this fight with a pro boxing record of 58-9-0 (49 KOs=84%) and he is ranked as the No.9 super featherweight in the world (currently the #1 in this division is Takashi Uchiyama). He has already fought twice in 2015 losing to Gary Russell Jr (=Gonzalez vs Russell Jr) and winning over Kazuki Hashimoto (=Gonzalez vs Hashimoto).
His opponent, Jonathan Oquendo, has a record of 25-4-0 (16 knockouts) and he entered as the No.33 featherweight. He was defeated by Abner Mares in 2014 (=Mares vs Oquendo) but then he came back to win beating Gabino Cota. Gonzalez vs Oquendo is on the undercard of Floyd Mayweather Jr vs Andre Berto. Watch the video and rate this fight!