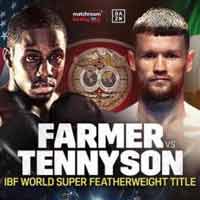 Review by AllTheBestFights.com: 2018-10-20, pretty good fight between Tevin Farmer and James Tennyson: it gets three stars./div>
The Ibf super-Fw champion Tevin Farmer entered this fight with a professional record of 26-4-1 (5 knockouts) and he is ranked as the No.17 super featherweight in the world. He suffered his last defeat in 2012, against Jose Pedraza, but then he has won 20 consecutive fights beating Arturo Santos Reyes, Kenichi Ogawa (Kenichi Ogawa vs Tevin Farmer) and Billy Dib in his last three (Tevin Farmer vs Billy Dib).
His opponent, James Tennyson, has a boxing record of 22-2-0 (18 KOs=82%) and he entered as the No.14 in the same weight class. He lost to Ryan Walsh in 2016 but then he has won six bouts beating Arnoldo Solano and Martin Joseph Ward in 2018 (Martin Joseph Ward vs James Tennyson). Farmer vs Tennyson is valid for the IBF World super featherweight title (Farmer’s first defense); undercard of Demetrius Andrade vs Walter Kautondokwa. Watch the video and rate this fight!