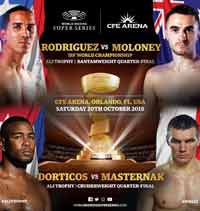 Review by AllTheBestFights.com: 2018-10-20, fight not so exciting between Keith Tapia and Mike Perez: it gets two stars.

Keith Tapia entered this fight with a pro boxing record of 18-1-0 (11 knockouts) but he is not ranked as he hasn’t fought since September 23, 2017 when he defeated Lateef Kayode (Keith Tapia vs Lateef Kayode); before this bout, in 2016, he had lost to Andrew Tabiti (Keith Tapia vs Andrew Tabiti).
His opponent, Mike Perez, has a record of 23-3-1 (15 knockouts) and he entered as the No.16 cruiserweight in he world. He was defeated by Mairis Briedis last year (Mairis Briedis vs Mike Perez) but he came back to win in 2018 against Pablo Matias Magrini. Tapia vs Perez is on the undercard of Emmanuel Rodriguez vs Jason Moloney. Watch the video and rate this fight!