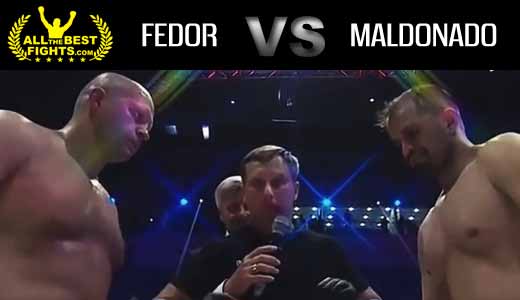 Review by AllTheBestFights.com: 2016-06-17, epic and brutal fight in which both fighters exchanged shot for shot in an authentic war: Fedor Emelianenko vs Fabio Maldonado gets five stars and it is a candidate for the Mma Fight of the Year 2016 but also for the Mma Round of the Year!

The former Pride and world combat sambo champion Fedor Emelianenko entered this fight with a mma record of 35-4-0 (77% finishing rate) and he is ranked as the No.48 heavyweight in the world. Fedor suffered three consecutive defeats between 2010 and 2011, against the former #1 Ufc Hw champion Fabricio Werdum, with Antonio ‘Bigfoot’ Silva (=Silva vs Emelianenko), and against Dan Henderson (=Henderson vs Emelianenko), after this bout he has won four fights beating Singh Jaideep in 2015 (after three years of inactivity, Emelianenko vs Jaideep).
His opponent, the former Ufc fighter and undefeated professional boxer Fabio Maldonado, has an official record of 22-9-0 (73% finishing rate) and he entered as the No.43 light heavyweight but he won just one out of his last four fights, against Hans Stringer (=Maldonado vs Stringer); after this bout he lost twice in 2015, with Quinton ‘Rampage’ Jackson (=Rampage vs Maldonado) and Corey Anderson (=Anderson vs Maldonado). Emelianenko vs Maldonado is the main event of the EFN 50 (Eurasia Fight Nights). Watch the video and rate this fight!