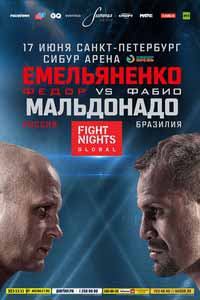 Review by AllTheBestFights.com: 2016-06-17, pretty good finish between Vitaly Minakov and Peter Graham but it is not enough to get three stars: it gets two.

The undefeated black belt in judo, former Bellator and world combat sambo champion Vitaly Minakov entered this fight with a perfect record of 17-0-0 (88% finishing rate) and he is ranked as the No.14 heavyweight in the world. He fought three times last year winning over Adam Maciejewski, Geronimo dos Santos (=Minakov vs dos Santos) and Josh Copeland (=Minakov vs Copeland).
His opponent, the black belt in karate and former ISKA kickboxing world champion Peter Graham, has a mma record of 11-9-0 (91% ko/tko victory rate – he has never won via submission) and he entered as the No.42 in the same weight class but he won just two out of his last six bouts, against Marcin Rozalski in 2014 (=Graham vs Rozalski) and Mariusz Pudzianowski in 2015 (= Pudzianowski vs Graham). Minakov vs Graham is on the undercard of Fedor Emelianenko vs Fabio Maldonado – EFN 50. Watch the video and rate this fight!