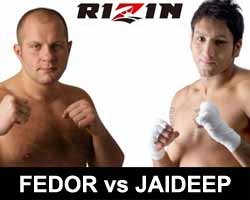 Review by AllTheBestFights.com: 2015-12-31, pretty good fight between Fedor Emelianenko and Jaideep Singh: it gets three stars.

The former Pride world champion Fedor Emelianenko entered this fight with a professional mma record of 34-4-0 (76% finishing rate) but he is not ranked as he hasn’t fought since June 21, 2012 when he defeated Pedro Rizzo (=Emelianenko vs Rizzo). Fedor had lost three consecutive fights between 2010 and 2011, against the current #1 Ufc Hw champion Fabricio Werdum, with Antonio ‘Bigfoot’ Silva (=Silva vs Emelianenko), and against Dan Henderson (=Henderson vs Emelianenko). After these three defeats he came back to win beating Satoshi Ishii (=Fedor vs Ishii) and Jeff Monson (=Fedor vs Monson).
His opponent, the 28-year-old Singh Jaideep (11 years younger than Fedor), has an official record of 2-0-0 (100% ko/tko victory rate – he has never won by submission) but he has a kickboxing record of 40-10-0. He has fought once in 2015 winning over Carlos Toyota. ‘The Last Emperor’ Emelianenko vs Jaideep is the main event of “Rizin FF 2 Iza”. Watch the video and rate this fight!