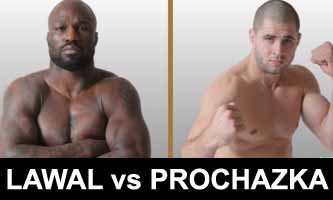 Review by AllTheBestFights.com: 2015-12-31, good fight with a spectacular finish: Muhammed Lawal vs Jiri Prochazka is close to get four stars!

The former Strikeforce champion and Bellator 2013 Summer Series tournament winner Muhammed ‘King Mo’ Lawal entered this fight with a pro record of 18-4-0 (67% ko/tko victory rate – he has never won via submission) and he is ranked as the No.13 light heavyweight in the world while his opponent, Jiri Prochazka, has an official record of 16-2-1 (94% finishing rate) and he entered as the No.49 in the same weight class. Lawal vs Prochazka is the final of the 8-men Rizin FF tournament, in the semifinal ‘King Mo’ defeated Teodoras Aukstuolis (=Lawal vs Aukstuolis) while Prochazka beat Vadim Nemkov (=Prochazka vs Nemkov); undercard of Fedor Emelianenko vs Singh Jaideep – Rizin FF 2. Watch the video and rate this fight!