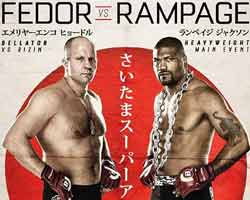 The 43-year-old former Pride, world combat sambo champion and black belt in judo Fedor Emelianenko (two years older than Rampage) entered this fight with a professional mma record of 38-6-0 (76% finishing rate) and he is ranked as the No.25 heavyweight in the world but he comes off the loss against Ryan Bader (Fedor Emelianenko vs Ryan Bader); before this bout, in 2018, he had beat Frank Mir in April (Fedor Emelianenko vs Frank Mir) and Chael Sonnen in October (Fedor Emelianenko vs Chael Sonnen).
His opponent, the former Ufc and Bellator light-Hw tournament (season 10) champ Quinton Rampage Jackson, has an official record of 38-13-0 (63% finishing rate) and he entered as the No.50 in the same weight class. He lost two consecutive fights between 2017 and 2018, against Muhammed King Mo Lawal (Rampage vs Lawal II) and Chael Sonnen (Quinton Rampage Jackson vs Chael Sonnen), but he came back to win in September 2018 with Wanderlei Silva (Quinton Rampage Jackson vs Wanderlei Silva 4). Fedor vs Rampage is the main event of Bellator 237 (Bellator & Rizin: Japan). Watch the video and rate this fight!