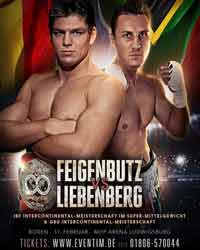 Review by AllTheBestFights.com: 2018-02-17, pretty good fight between Vincent Feigenbutz and Ryno Liebenberg: it gets three stars.

The former Wba super-Mw champion Vincent Feigenbutz entered this fight with a record of 27-2-0 (24 KOs=89%) and he is ranked as the No.22 super middleweight in the world. He lost the rematch with Giovanni De Carolis in 2016 (Vincent Feigenbutz vs Giovanni De Carolis 2) but then he has won six consecutive fights beating Norbert Nemesapati and Gaston Alejandro Vega in 2017.
His opponent, Ryno Liebenberg, has a boxing record of 18-5-0 (12 knockouts) and he entered as the No.35 in the same weight class. He lost three consecutive bouts between 2016 and 2017, against Erik Skoglund and twice with Enrico Koelling (Enrico Koelling vs Ryno Liebenberg I), but he came back to win in October 2017 with Patrick Mukala. Feigenbutz vs Liebenberg is valid for the IBF Inter-Continental super middleweight title. Watch the video and rate this fight!