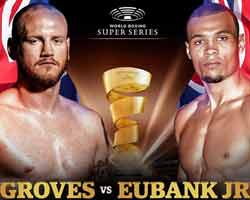 Review by AllTheBestFights.com: 2018-02-17, some good exchanges between Chris Eubank Jr and George Groves but it is not enough to get three stars: it gets two.

The former interim Wba Mw and current Ibo super-Mw champion Chris Eubank Jr entered this fight with a professional record of 26-1-0 (20 knockouts) and he is ranked as the No.1 super middleweight in the world. He suffered his only loss when he faced Billy Joe Saunders in 2014 (via split decision, Saunders vs Eubank Jr), since then he has won eight bouts beating Renold Quinlan (Eubank Jr vs Quinlan), Arthur Abraham (Eubank vs Abraham) and Avni Yildirim in 2017 (Chris Eubank Jr vs Avni Yildirim).
His opponent, the Wba super-Mw champion George Groves, has a boxing record of 27-3-0 (20 knockouts) and he entered as the No.3 in the same weight class. He lost to Badou Jack in 2015 (via split decision, Groves vs Jack), but then he has won six bouts beating Fedor Chudinov (Groves vs Chudinov) and Jamie Cox last year (George Groves vs Jamie Cox). Groves vs Eubank is the semifinal of the World Boxing Super Series super-Mw tournament and it is valid for the IBO and WBA Super World super middleweight titles. Watch the video and rate this fight!