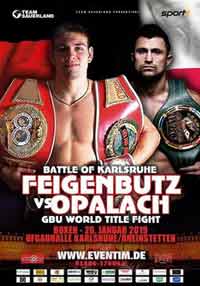 Review by AllTheBestFights.com: 2019-01-26, some good exchanges between Vincent Feigenbutz and Przemyslaw Opalach but it is not enough to get three stars: it gets two.

The former Wba super-Mw champion Vincent Feigenbutz entered this fight with a professional boxing record of 29-2-0 (26 KOs=90%) and he is ranked as the No.14 super middleweight in the world. He lost the rematch with Giovanni De Carolis in 2016 (Vincent Feigenbutz vs Giovanni De Carolis 2) but then he has won eight consecutive fights defeating Ryno Liebenberg (Vincent Feigenbutz vs Ryno Liebenberg) and Yusuf Kanguel in 2018.
His opponent, Przemyslaw Opalach, has an official record of 27-2-0 (22 KOs=81%) and he entered as the No.91 in the same weight class. He was defeated by Geard Ajetovic in 2013 but since then he has won 15 bouts beating Aleksandar Kuvac last year. Feigenbutz vs Opalach is valid for the vacant GBU World super middleweight title. Watch the video and rate this fight!