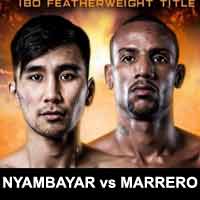 Review by AllTheBestFights.com: 2019-01-26, good fight between Tugstsogt Nyambayar and Claudio Marrero: it gets three stars.

The undefeated former Olympian Tugstsogt Nyambayar entered this fight with a perfect record of 10-0-0 (9 KOs=90%) and he is ranked as the No.12 featherweight in the world. In his last three fights ‘King Tug’ Nyambayar has won over Jhon Gemino, Harmonito Dela Torre and Oscar Escandon (Tugstsogt Nyambayar vs Oscar Escandon).
His opponent, the former Ibo and interim Wba Fw champion Claudio Marrero, has a boxing record of 23-2-0 (17 knockouts) and he entered as the No.20 in the same weight class. He lost to Jesus M Rojas in 2017 (Claudio Marrero vs Jesus M Rojas) but he came back to win against Jorge Lara in 2018. Nyambayar vs Marrero is valid for the vacant IBO World featherweight title; undercard of Keith Thurman vs Josesito Lopez. Watch the video and rate this fight!