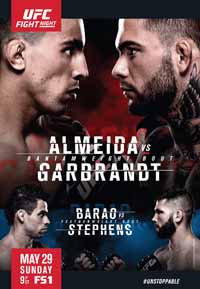 Review by AllTheBestFights.com: 2016-05-29, fight not particularly exciting between Josh Burkman and Paul Felder: it gets two stars.

Joshua Burkman entered this fight with a pro record of 28-12-0 (61% finishing rate) and he is ranked as the No.35 lightweight in the world while his opponent, the black belt in tae-kwon-do and karate Paul Felder, has an official record of 11-2-0 (64% ko/tko victory rate – he has never won via submission) and he entered as the No.44 in the same weight class. Both fighters lost twice in 2015 but they came back to win in 2016: Burkman has beat KJ Noons while Felder has won over Daron Cruickshank. Burkman vs Felder is on the undercard of Thomas Almeida vs Cody Garbrandt – UFC Fight Night 88. Watch the video and rate this fight!