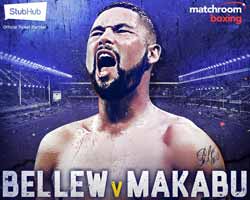 Review by AllTheBestFights.com: 2016-05-29, nice and tough fight between Tony Bellew and Ilunga Makabu: it is close to get four stars!

Tony Bellew entered this fight with a pro record of 26-2-1 (16 knockouts) and he is ranked as the No.5 cruiserweight in the world (currently the #1 in this division is Krzysztof Glowacki). He suffered his last loss when he faced Adonis Stevenson in 2013 (=Stevenson vs Bellew), since then he has won six bouts beating Mateusz Masternak in his last one (=Bellew vs Masternak).
His opponent, Ilunga Makabu, has an official boxing record of 19-1-0 (18 KOs=95%) but he is not ranked as he hasn’t fought since May 16, 2015 when he defeated Thabiso Mchunu. His only loss occurred at his professional debut in 2008, against Khayeni Hlungwane. ‘Bomber’ Bellew vs Makabu is valid for the vacant WBC World cruiserweight title. Watch the video and rate this fight!