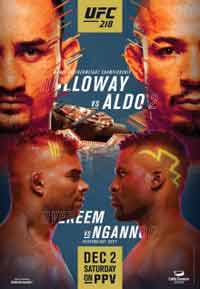 Review by AllTheBestFights.com: 2017-12-02, fight not so exciting between Paul Felder and Charles Oliveira: it gets two stars.

The black belt in Brazilian jiu-jitsu Charles Oliveira entered this fight with a pro record of 22-7-0 (91% finishing rate) and he is ranked as the No.13 lightweight in the world. He lost two consecutive bouts in 2016, with Anthony Pettis (=Pettis vs Oliveira) and Ricardo Lamas (=Lamas vs Oliveira) but he came back to win in 2017 against Will Brooks (=Brooks vs Oliveira).
His opponent, the black belt in karate and tae-kwon-do Paul Felder, has an official mma record of 14-3-0 (71% finishing rate) and he entered as the No.20 in the same weight class. He lost once in 2016, against Francisco Trinaldo (=Trinaldo vs Felder) but then he has won over Alessandro Ricci and Stevie Ray (=Ray vs Felder). Felder vs Oliveira is on the undercard of Max Holloway vs Jose Aldo 2 – UFC 218. Watch the video and rate this fight!

(Free embeddable video hosted on Youtube and not uploaded by AllTheBestFights)
https://www.youtube.com/watch?v=R8obde2Tq2o