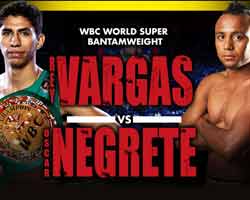 Review by AllTheBestFights.com: 2017-12-02, pretty good fight between Rey Vargas and Oscar Negrete: it gets three stars.

Both undefeated, the Wbc super-Bw champion Rey Vargas entered this fight with a perfect boxing record of 30-0-0 (22 knockouts) and he is ranked as the No.4 super bantamweight in the world (currently the #1 in this division is Guillermo Rigondeaux) while his opponent, Oscar Negrete, has an official record of 17-0-0 (7 knockouts) and he entered as the No.16 bantamweight. Both boxers have fought twice in 2017: Vargas has defeated Gavin McDonnell (=Vargas vs McDonnell) and Ronny Rios (=Vargas vs Rios) while Negrete has beat Victor Ruiz and Sergio Frias (=Negrete vs Frias). Vargas vs Negrete is valid for the WBC World super bantamweight title (Vargas’ second defense); undercard of Miguel Cotto vs Sadam Ali. Watch the video and rate this fight!