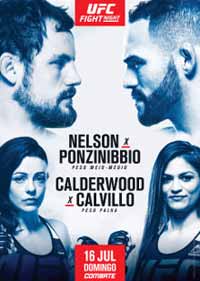 Review by AllTheBestFights.com: 2017-07-16, pretty good finish between Stevie Ray and Paul Felder but it is not enough to get three stars: it gets two (UFC Performance of the Night).

Steven Ray entered this fight with a pro record of 21-6-0 (67% finishing rate) and he is ranked as the No.25 lightweight in the world. He lost to Alan Patrick last year but then he has won over Ross Pearson (=Ray vs Pearson) and Joe Lauzon (=Lauzon vs Ray).
His opponent, the black belt in karate and tae-kwon-do Paul Felder, has an official mma record of 13-3-0 (69% finishing rate) and he entered as the No.33 in the same weight class. He also lost once in 2016, against Francisco Trinaldo (=Trinaldo vs Felder) but he came back to win in 2017 with Alessandro Ricci. Paul Felder vs Stevie Ray is on the undercard of Gunnar Nelson vs Santiago Ponzinibbio – UFC Fight Night 113. Watch the video and rate this fight!