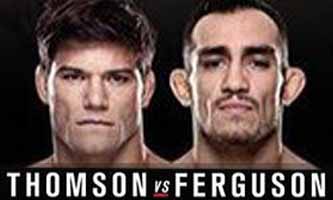 Review by AllTheBestFights.com: 2015-07-15, great fight between Josh Thomson and Tony Ferguson: it gets three stars (UFC Performance of the Night).

The former Strikeforce Lw champion Josh Thomson entered this fight with a pro mma record of 20-7-0 (70% finishing rate) and he is ranked as the No.12 lightweight in the world but he comes off two consecutive losses, against Benson Henderson (=Henderson vs Thomson) and Bobby Green (=Thomson vs Green).
His opponent, the TUF 13 tournament winner Tony Ferguson, has a record of 18-3-0 (83% finishing rate) and he entered as the No.11 in the same weight class. He suffered his last defeat in 2012 when he faced Michael Johnson, since then he has won five bouts beating Gleison Tibau in his last one (=Ferguson vs Tibau). Thomson vs Ferguson is on the undercard of Frank Mir vs Todd Duffee – UFC Fight Night 71. Watch the video and rate this fight!