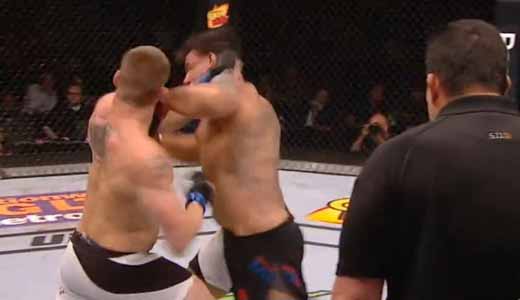 Review by AllTheBestFights.com: 2015-07-15, brutal exchanges from the first bell and spectacular finish: Frank Mir vs Todd Duffee is one of the best mma fights of the year 2015 and it gets four stars (UFC Performance of the Night).

The black belt in karate and Bjj and former Ufc Hw champion Frank Mir entered this fight with a professional mma record of 17-9-0 (76% finishing rate) and he is ranked as the No.10 heavyweight in the world (currently the #1 in this division is Fabricio Werdum). He suffered four consecutive defeats between 2012 and 2014, the last one against Alistair Overeem (=Overeem vs Mir), but after this bout he came back to win beating Antonio ‘Bigfoot’ Silva (=Silva vs Mir).
His opponent, Todd Duffee, has an official record of 9-2-0 (100% ko/tko victory rate – he has never won via submission) and he entered as the No.32 in the same weight class. He lost twice in 2010, against Mike Russow and Alistair Overeem, but since then he has won three bouts winning over Anthony Hamilton in his last one (=Duffee vs Hamilton). Mir vs Duffee is the main event of the UFC Fight Night 71. Watch the video and rate this fight!