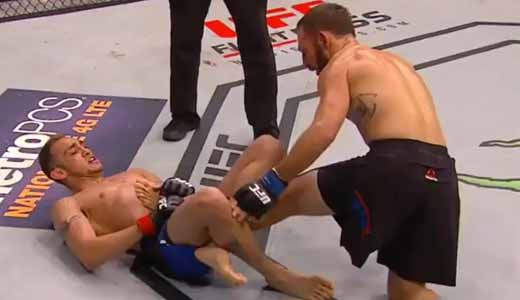 Review by AllTheBestFights.com: 2016-07-13, exciting back and forth fight thanks to an amazing performance by both fighters: Tony Ferguson vs Landon Vannata is one of the best mma fights of 2016 and it gets four stars (UFC Fight of the Night).

The Tuf 13 winner Tony Ferguson entered this fight with a pro mma record of 20-3-0 (80% finishing rate) and he is ranked as the No.6 lightweight in the world (currently the #1 in this division is Eddie Alvarez) while his opponent, the undefeated Landon Vannata (who replaces Michael Chiesa), has a perfect record of 8-0-0 (87% finishing rate). Ferguson’s last defeat occurred when he faced Michael Johnson in 2012, since then he has won seven consecutive bouts beating Edson Barboza in his last one (=Ferguson vs Barboza). Ferguson vs Vannata is on the undercard of Michael McDonald vs John Lineker – UFC Fight Night 91. Watch the video and rate this fight!