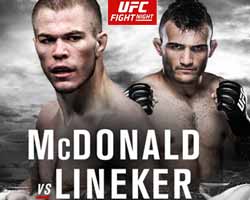 Review by AllTheBestFights.com: 2016-07-13, nice exchanges between Michael McDonald and John Lineker: this bout gets three stars (UFC Performance of the Night).

Michael McDonald entered this fight with a professional mma record of 17-3-0 (88% finishing rate) and he is ranked as the No.21 bantamweight in the world. He suffered his last loss when he faced Urijah Faber in 2013 (=Faber vs McDonald) but since then he has fought just once beating Masanori Kanehara.
His opponent, John Lineker, has an official record of 27-7-0 (59% finishing rate) and he entered as the No.9 in the same weight class (currently the #1 in this division is Dominick Cruz). He lost to Ali Bagautinov in 2014 (=Lineker vs Bagautinov) but then he has won four consecutive fights defeating Rob Font in his last one. McDonald vs Lineker is the main event of the UFC Fight Night 91. Watch the video and rate this fight!