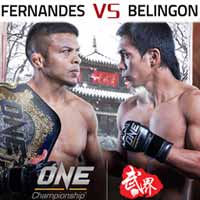 Review by AllTheBestFights.com: 2016-01-23, fight not particularly good between Bibiano Fernandes and Kevin Belingon: it gets two stars.

The black belt in Brazilian jiu-jitsu Bibiano Fernandes entered this fight with a professional mma record of 18-3-0 (44% finishing rate) and he is ranked as the No.5 bantamweight in the world (currently the #1 in this division is Dominick Cruz). He suffered his last defeat in 2010 when he faced Hiroyuki Takaya losing the Dream Fw title, after this bout he moved down in weight class to the bantamweight division winning ten consecutive fights, the last one against Toni Tauru.
His opponent, Kevin Belingon, has an official record of 13-4-0 (62% finishing rate) and he entered as the No.52 in the same weight class. He lost to Dae Hwan Kim in 2014 but then he came back to win against Koetsu Okazaki. Fernandes vs Belingon, main event of One FC 37, is valid for the One bantamweight title (held by Fernandes). Watch the video and rate this fight!

Event: ONE Championship 37: Dynasty of Champions

(Free embeddable video hosted on Youtube and not uploaded by AllTheBestFights, to report it please visit this link where the video is hosted)

Report broken video
« 2016 BOXING fight – Jarrell Miller vs Donovan Dennis – full fight Video
2016 K-1 MUAY THAI fight – Giorgio Petrosyan vs Jiao Fukai – full fight Video WLF »
HELP US!!! Since the CORONAVIRUS pandemic started, AllTheBestFights.com has struggled to survive! If you have enjoyed this website for the past 10 years, today we ask you for a little help: