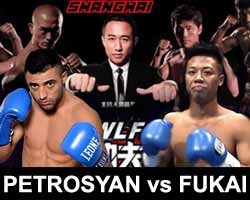 Review by AllTheBestFights.com: 2016-01-23, disappointing fight between Giorgio Petrosyan and Jiao Fukai: it gets two stars.

The former K-1 World Max and Glory champion Giorgio Petrosyan entered this fight with a professional kickboxing record of 80-2-2 (36 knockouts) and he is ranked as the No.4 super welterweight in the world while unfortunately we don’t know the record of his opponent, Jiao Fukai. ‘The Doctor’ Petrosyan suffered his second defeat of his career during the semifinal of the Glory lightweight tournament against Andy Ristie in 2013 (=Petrosyan vs Andy Ristie), since then he has fought four times beating Xu Yan (=Petrosyan vs Yan) and Josh Jauncey in his last two bouts (=Petrosyan vs Jauncey). Petrosyan vs Fukai is the main event of Wu Lin Feng World Championship 2016. Watch the video and rate this fight!