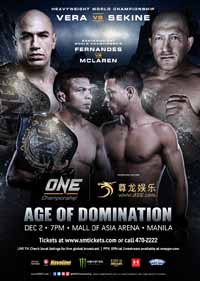 Review by AllTheBestFights.com: 2016-12-02, fight not so exciting between Bibiano Fernandes and Reece McLaren: it gets two stars.

The black belt in Bjj, former Dream and current One Fc champion Bibiano Fernandes entered this fight with a mma record of 19-3-0 (47% finishing rate) and he is ranked as the No.6 bantamweight in the world (currently the #1 in this division is Dominick Cruz). He suffered his last loss when he faced Hiroyuki Takaya in 2010, since then he has collected 11 consecutive victories beating Kevin Belingon in 2016 (=Fernandes vs Belingon).
His opponent, Reece McLaren, has an official record of 9-3-0 (78% finishing rate) and he entered as the No.56 in the same weight class. He was defeated by Ben Nguyen in 2014 but then he has won four bouts winning over Muin Gafurov in his last one. Fernandes vs McLaren is valid for the ONE bantamweight title; undercard of Brandon Vera vs Hideki Sekine – ONE FC 50. Watch the video and rate this fight!

Event: ONE Championship 50: Age of Domination