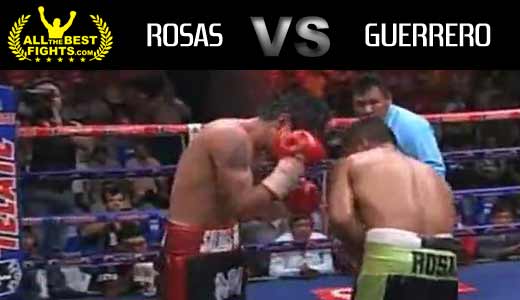 Review: 2014-02-15, a fight in which almost every period could be a candidate for Round of the Year, it is definitely a Fight of the Year! Daniel Rosas vs Rodrigo Guerrero gets five stars because it was a brutal war with nonstop pace and both fighters exchanged shot for shot in a very exciting and epic fight: a bout to watch and rewatch! The undefeated Daniel Rosas entered this fight with a professional boxing record of 17-0-1 (11 knockouts) and he is ranked as the No.19 super bantamweight in the world, the only man who stopped him was Jose Cabrera in 2011 (fight ended in a draw and valid for the interim WBO super flyweight title).
His opponent, Rodrigo Guerrero, has an official record of 19-5-1 (12 knockouts) and he entered as the No.19 super flyweight, he won the IBF super-Flw title in 2011 beating Raul Martinez but then he lost the belt at his first defense when he faced Juan Carlos Sanchez Jr (=Sanchez Jr vs Guerrero); ‘Gatito’ Guerrero fought again for the same title in his last bout but he was defeated again, this time the winner was Daiki Kameda (=Kameda vs Guerrero). ‘Bad boy’ Rosas vs Guerrero is on the undercard of Roman Gonzalez vs Juan Kantun. Watch the video and rate this fight!