The former Ibf super-Flw champion Rodrigo Guerrero entered this fight with a pro record of 24-5-1 (16 knockouts) and he is ranked as the No.12 super bantamweight in the world. He suffered his last loss when he faced Daiki Kameda in 2013 (=Kameda vs Guerrero), since then he has won five consecutive bouts beating Fernando Aguilar in his last one.
His opponent, the former Ibf Bw champion Stuart Hall, has an official boxing record of 19-4-2 (7 knockouts) and he entered as the No.58 in the same weight class. He lost two consecutive fights in 2014, against Paul Butler (=Hall vs Butler) and Randy Caballero (=Caballero vs Hall), but then he has won three bouts. Guerrero vs Hall is on the undercard of Josh Warrington vs Hisashi Amagasa. Watch the video and rate this fight!

END_OF_DOCUMENT_TOKEN_TO_BE_REPLACED

Review: 2014-02-15, a fight in which almost every period could be a candidate for Round of the Year, it is definitely a Fight of the Year! Daniel Rosas vs Rodrigo Guerrero gets five stars because it was a brutal war with nonstop pace and both fighters exchanged shot for shot in a very exciting and epic fight: a bout to watch and rewatch! The undefeated Daniel Rosas entered this fight with a professional boxing record of 17-0-1 (11 knockouts) and he is ranked as the No.19 super bantamweight in the world, the only man who stopped him was Jose Cabrera in 2011 (fight ended in a draw and valid for the interim WBO super flyweight title).
His opponent, Rodrigo Guerrero, has an official record of 19-5-1 (12 knockouts) and he entered as the No.19 super flyweight, he won the IBF super-Flw title in 2011 beating Raul Martinez but then he lost the belt at his first defense when he faced Juan Carlos Sanchez Jr (=Sanchez Jr vs Guerrero); ‘Gatito’ Guerrero fought again for the same title in his last bout but he was defeated again, this time the winner was Daiki Kameda (=Kameda vs Guerrero). ‘Bad boy’ Rosas vs Guerrero is on the undercard of Roman Gonzalez vs Juan Kantun. Watch the video and rate this fight!

END_OF_DOCUMENT_TOKEN_TO_BE_REPLACED 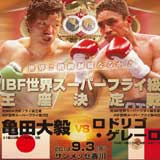 END_OF_DOCUMENT_TOKEN_TO_BE_REPLACED

Review: 2012-11-03, great performance and amazing exchanges from the first round: tough and exciting toe-to-toe fight, Sebastien Gauthier vs Rodrigo Guerrero gets four stars! Sebastien Gauthier (22-3-0) entered as the No.36 super bantamweight in the world while Rodrigo Guerrero (17-4-1) entered as the No.16 super flyweight. Gauthier vs Guerrero is on the undercard of Lucian Bute vs Denis Grachev. Watch the video!