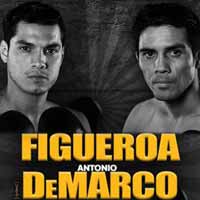 Review by AllTheBestFights.com: 2015-12-12, outstanding performance by both boxers with some nice and tough toe-to-toe exchanges: Omar Figueroa vs Antonio DeMarco is very close to get four stars!

The undefeated former Wbc lightweight champion Omar Figueroa Jr entered this fight with a professional record of 25-0-1 (18 knockouts) and he is ranked as the No.7 super welterweight in the world (currently the #1 in this division is Erislandy Lara). He has fought once in 2015 beating Ricky Burns (=Figueroa vs Burns).
His opponent, Antonio DeMarco, has an official boxing record of 31-5-1 (23 knockouts) and he entered as the No.40 in the same weight class but he comes off two consecutive losses: against Jessie Vargas (=Vargas vs DeMarco) and Rances Barthelemy (=Barthelemy vs DeMarco). ‘Panterita’ Figueroa vs DeMarco is the main event of the evening. Watch the video and rate this fight!