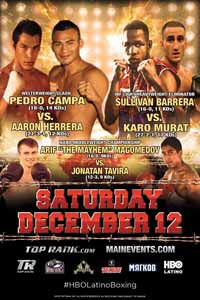 Review by AllTheBestFights.com: 2015-12-12, nice and tough exchanges between Sullivan Barrera and Karo Murat: it gets three stars.

The undefeated Sullivan Barrera entered this fight with a perfect boxing record of 16-0-0 (11 knockouts) and he is ranked as the No.31 light heavyweight in the world. He has fought twice in 2015 winning over Jeff Lacy (=Barrera vs Lacy) and Hakim Zoulikha.
His opponent, Karo Murat, has a record of 27-2-1 (17 knockouts) and he entered as the No.62 in the same weight class. He lost to Bernard Hopkins in 2013 (=Hopkins vs Murat) but then he has won two consecutive fights. Barrera vs Murat, IBF light heavyweight title eliminator, is on the undercard of Pedro Campa vs Aaron Herrera. Watch the video and rate this fight!